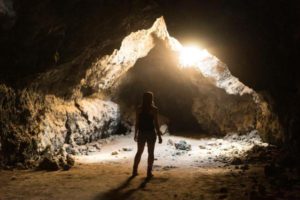 Have you ever started a new program, a new diet, or any new regime that you were really excited about it, then suddenly . . . you stopped? You watched as other people got great results, and you knew that you could too– but then something got in the way. You felt blocked and couldn’t seem to move forward, and you don’t know why.

This is emotional resistance! I can’t tell you how many times I’ve been down this road, and sometimes the price tag has been hefty. And yet, learning to break through your resistance offers tremendous rewards: personal freedom, feeling back in the flow rather than swimming upstream, and the availability of huge energy reservoirs that were previously not available to you.

What is Emotional Resistance?

Emotional resistance is often rooted in our unconscious minds and can sabotage your good intentions. Something deep down in you doesn’t want to go through with whatever the task at hand is, and you may not even be aware of it.

Here’s an example that happened to me. When I was young, a second grader, I tried out for the chorus. I just wanted to sing with the other kids, but I was told that I couldn’t sing well enough and was not allowed to join. An experience of exclusion can leave a deep scar on a young psyche, and I truly believed that I couldn’t sing–so I didn’t. But eventually this lack of confidence in my own voice was compounded by other childhood experiences.

The negative self-image around my voice gained momentum until I felt that my voice didn’t matter.

In early adulthood I developed a disease in my throat area, around the thyroid. The blocked energy contributed to my dis-ease. I had literally blocked my energy and developed emotional resistance to using my voice.

Can you think of examples from your past where blocked energy may still be lodged in your body and having a negative impact on your life?

“There is a way through every block” (Yogi Bhajan)

An emotional block is your internal, and probably unconscious, resistance to change. At the root of resistance lies the ego’s fear-based whisperings; fear that you are not enough, fear of the unknown, fear of failure . . . or maybe fear of your own magnificence and light, as Marianne Williamson might say.

How Do I Overcome Emotional Resistance?

Most often, resistances operate beneath our conscious awareness. My own emotional blockages around my voice slipped into my unconscious awareness over time. We all have emotional patterns that become stuck. In the Kundalini yogic tradition, patterns of blocked energies are called samskaras, and there are ways to clear them, which I’ll get to in just a bit.
As I grew older, I was not consciously aware that I was suppressing my voice or not speaking my truth. Not speaking up to inappropriate ways people spoke to me, not speaking up for things that I wanted to do, and most of all, closing the window on my heart that got tired of trying to get my attention. Until I became ill with an autoimmune disease.
Even then, it took me years to put 2 + 2 together. But eventually, I did. Here are just a few ways that help me unblock my resistances.
Resistance catches us off guard; however, if we pause and simply notice what’s going on in the present moment, we have a chance to allow the resistance to soften and dissolve.
We surrender to what is happening (or what we’re feeling) in the moment and not how we would like it to be.
This seat of wisdom comes from beyond the ego, from the small and gentle voice within the heart that is continually there to guide us.

Begin to bring awareness to your body when you feel blocked, and simply notice. Where do you feel it in your body? Bring your attention there and breath deeply into that space.

By simply noticing and allowing, you begin to honor yourself. When you become quiet inside you will eventually learn to hear the gentle voice of your heart as it whispers to you. My voice sounded something like this: “God [the Great All that is or Universe] gave you the voice you have for a reason, own it, use it, and respect it.”

Ironically, my spiritual name is Har Kirat, which means “one who sings God’s praises.” At first, I thought this was a Cosmic joke!

Now, when I lead a Kundalini yoga class, which involves much chanting, I reach deeply into my belly and bring my voice forward as authentically as I can. I love Kundalini Yoga and meditation, because it clears out emotional garbage (samskaras) from your unconscious mind without having to dredge up the past, as in talk therapy.

Your body holds the traumas (large and small) and Kundalini yoga removes troubling thoughts from your past and present. Kundalini yoga is the yoga of awareness and it is fast acting.

Why Should I Learn to Release Resistances?

Working through resistance and releasing your emotional blocks becomes a gift that leads you back to your Infinite power and light. On the other side of resistance lies a new life fueled by your own authentic power rather than your fear.

Researchers have demonstrated that stress inhibits our ability to think clearly. When stress hormones, such as cortisol, are released there is a phenomenon known as “cortical inhibition.” When stress turns into a way of life this cortical inhibition helps explain why we are not as sharp as we normally could be. “Simply said, stress inhibits a small part of your brain and you can’t function at your best (HeartMath).” As we practice to practice emotional self-regulation our innate heart-based intuition begins to flow again moving you from blocked to flowing again.

We are destined to be so much greater than our material possessions–we have unique purposes to fulfil.

Whether you start a yoga class, meditation, or whatever your new endeavor may be, the ego will likely tempt you to stop, and tell you that meditation is a waste of time. By monitoring your meditation progress your ego will begin to settle down. It has the evidence it needs.

How do I know if the meditation is working?

If you start with a goal of just 11-minutes a day of meditation, for example, you can break through the inevitable resistance that shows up more easily.

When you add biofeedback to your daily routine you can scientifically track your progress. You don’t need to be a scientist, however to clearly see how your mindset affects your physiology. Red means resistance, or not being in flow and green means you’re in the flow. Are you meeting with a lot of resistance, feeling frustrated, and maybe even feeling badly about yourself, because you start something and get blocked? Individual or group mentoring can be especially powerful in breaking through old patterns and moving beyond your limiting blocks and fears.

Together, we will use proven Ancient and High Tech healing technologies that will get you past your blockages. With accountability, community, and the right leadership you will make great strides. For more information about HeartMath tools and technologies click here.

Or as Michael A. Singer said:

“If you want real life, real growth, real spirituality, it’s all about letting go of the blockages you’re holding inside of you.” (The Surrender Experiment).

I have created specific programs using technologies (that I have personally found transformational) to work on the negative effects of stress, high-functioning anxiety, and stress-induced depression. Fear and resistance underlie these conditions. If you would like to learn how to clear emotional resistances, please contact me for a call to see what programs are available that may help you. You can email me directly at HowToRelieveStressNaturally.com/contact or use the link below to go directly to my calendar.

If you believe that you may be experiencing emotional blocks due to stress, high-functioning anxiety, and/or stress-induced depression then schedule a free 15-minute Strategy Session with me.

Affiliate Disclosure: Any/all of the links on this website are affiliate links of which HowToRelieveStress receives a small commission from sales of certain items, but the price is the same for you. Products referenced have been carefully vetted by Dr. Anne Taylor.