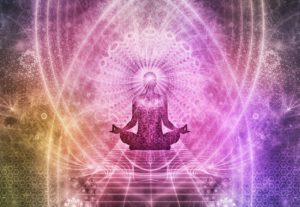 “Gopi Krishna never felt that what took place was personally his. From the beginning he was a mere instrument … of a vaster truth” (James Hillman). C. G. Jung believed that many patients were misdiagnosed as having mental illness when in fact they were undergoing a spiritual emergence–kundalini awakening.Everyone’s experience is unique and ranges from subtle sensations to a full blown kundalini awakening, like Gopi Krishna’s.

Before we look at what is a kundalini awakening, let me define what I mean by kundalini. The term kundalini is hard to pin down, because this phenomenon cannot be measured by Western scientific methods. There are many notions regarding what kundalini is and what it is not.

Kundalini means “the curl in the lock of the hair of the beloved.” The snake is often used to symbolize kundalini energy, and can be seen throughout world mythology and religions. Tantric Yogic science teaches that kundalini is your creative power, the energy of cosmic consciousness. Kundalini is the “nerve of the soul.” Kundalini has been called the “serpent power,” and has long associations with Egyptian, Sumerian, Hindu, and other traditions. In its latent form is lies coiled like a serpent.

Kundalini undulates and is feminine in nature, and has been called the evolutionary power of consciousness. It is believed to be a spiritual or cosmic energy that drives evolution. Consider the last line of Johan Wolfgong von Goethe’s Faust II: “the eternal feminine hithers us on.”  Kundalini is a powerful force that transcends cultures and geography.

Eastern sciences teach that everyone has kundalini coursing through their bodies at all times, otherwise we wouldn’t be alive. In most people, there is an untapped reservoir of kundalini energy that lies dormant at the base of the spine in addition to kundalini that circulates throughout our bodies. Kundalini is subtle psychic energy that travels through the bodies subtle energy channels called nadis. Think of meridian points and energy pathways of the body used during acupuncture–the concept is similar. Kundalini is psychic energy “sleeping” at the area of the sacrum (Holy Bone) at the root chakra (Muladhara chakra). What keeps the kundalini dormant can be symbolically thought of as a knot, the “knot of Brahman,” located at the first chakra, at the base of your spine. The snake lies coiled and sleeping until aroused. When the knot loosens, the energy begins to flow.

How is Kundalini Awakened?

We learn about Kundalini through direct experience. Transformative energy in the human body which can be activated spontaneously, or through spiritual disciplines and practices. It is best not to try to induce kundalini until you are well prepared for it, otherwise the experience could become quite debilitating. The nervous system and subtle energy channels must be strengthened before the “high wattage” of kundalini flows.

Once awakened, kundalini typically travels from the Muladhara through the central subtle channel (nadi), the sushmana, and continues to the Sahasrara chakra at the crown. The process can stop at any point or be thwarted through other pathways.

I teach and practice Kundalini Yoga, as taught by Yogi Bhajan, because it is specifically formulated to gently arouse the kundalini energy. This ancient yogic science combines exercises (asanas), breathing patterns (pranayam), hand positions (mudras), eye positions (dhrist), and sacred sound (mantra and music) to safely arouse the kundalini energy. Kundalini yoga and meditation is a precise technology designed to be done for specific amounts of time and in a designated order. The combined techniques mentioned above modulates the energy so that kundalini can be released safely. Kundalini energy is nothing to play around with and I highly recommend finding a certified yoga teacher who is well trained so that s/he may properly guide you. All forms of yoga are designed to eventually raise the kundalini, although Kundalini Yoga is the yoga of awareness and fast acting.

What are Signs and Symptoms of Awakened Kundalini?

Caution: I cannot emphasize enough that it is important not to try to force a kundalini awakening. The wisdom of the Universe, Kundalini Shakti (Divine Feminine), and cosmic consciousness work in their own time. Kundalini is an evolutionary consciousness that has its own master timing. Kundalini will naturally awaken in you when and if you are ready for it. It is like a supreme gift or it can be a nightmare if coaxed without proper preparation.

Kundalini Rising: Exploring the Energy of Awakening, by several contributors

Kundalini: The Evolutionary Energy in Man, by Gopi Krishna

Anne Taylor, Ph.D. Please contact Dr. Anne Taylor for questions, comments, experiences, and a preliminary consultation if desired. I have been working 1:1 with people experiencing symptoms of kundalini awakening through the examination of dreams, symbols, and their personal experiences. Please contact me for more information.

Affiliate Disclosure: Please note: I often use affiliate links when I recommend books and other products. This means I earn a small commission if you purchase through these links. The price stays the same to you. This helps me pay for my continuing research which I share with you.