“The goal of life is to make your heartbeat match the beat of the universe, to match your nature with Nature.” – Joseph Campbell

Heart Coherence
Syncing up your heart with the universe

American mythologist Joseph Campbell had great insights into the wisdom of traditions that have existed since the dawn of civilization. From the Sumerian myth of Inanna to his collaborative effects with George Lucas on Star Wars, Joseph Campbell understood the archetypal significance of symbols and story. The symbolic meaning of matching your heartbeat to the heartbeat of the universe helps take a complex topic, and make it easy for even a child to understand.

Make your heartbeat match the beat of the universe

Campbell’s quote goes a long way to explaining how to overcome the negative effects of stress by using technologies from ancient wisdom traditions. Wisdom traditions from around the world understood the importance of the heart getting in sync with a larger force than its own field–to make your heartbeat match something greater than itself. This is essentially what the term heart coherence means. When the heart’s electromagnetic field aligns with larger electromagnetic fields of the universe the heart becomes “coherent”.

HeartMath® defines coherence as a “measure of the pattern in the heart’s rhythm, and reflects an orderly and harmonious synchronization among various systems in the body such as the heart, respiratory system and blood-pressure rhythms.”

Simply said, you are matching your heartbeat with the heartbeat of something bigger. The heart syncs up to bigger electromagnetic fields just as the organs of the body sync up to the heart’s magnetic field when in a harmonious state. The same phenomenon can happen between two or more people when their hearts synchronize. I’m sure you’ve experienced the sensation when you can finish one another’s sentences, because you in the same groove.

Ongoing stress is not a natural state of living

The body’s natural state is one of coherence, yet most people live in a state of incoherence due to high levels of stress from daily routine living. Incoming stressors seem unending in modern-day life. Stress-filled lives have become the new norm due to high demands from work, family, the information deluge, and global uncertainty that we find ourselves in.

Our bodies are designed to become super-charged for survival during a stressful event; however, the body does not differentiate between being chased by a tiger, a near-miss auto accident, a demanding boss, or unrelenting financial pressures. When in a state of stress, the heart’s rhythm is chaotic (left waveform in diagram), whereas in a state of calm and ease, the heart produces  a coherent sine wave pattern (right waveform).

We produce and live within greater electromagnetic fields

There is nothing woo-woo here. Our hearts produce large and measurable electromagnetic fields that synchronize with the larger electromagnetic fields of the earth, sun, and solar system when we are in a state of heart coherence. When the heart is coherent with the larger order of interacting oscillating fields, the earth, sun, and solar system, it generates a sine wave pattern as shown above.

Heart Rate Variability–what is it and why should I care?

“A number of observational studies have shown that low HR variability is an independent predictor of sudden cardiac death.”–Journal of the American College of Cardiology

When a mainstream medical journal publishes such a startling statistic, why isn’t it common knowledge that “low HR variability is an independent predictor of sudden cardiac death,” the way that cholesterol and high blood pressure values are?

Heart rate variability is the dynamic beat-to-beat changes in your heart’s rate that occur naturally throughout the day and night, whether you are active or at rest. If your heart rate averages 60 beats per second, you might think that it beats once per second. That would be a HRV of zero–no variation, and the person would be in big trouble, health wise and other wise.

Heart beats with little variation over time (i.e. once per second) is indicative of low heart coherence. Clinically, the example of HRV of zero is not viable, and I use it here only to illustrate the point clear.
A heart in physiological coherence generates rhythmic, symmetrical patterns, measured from the beat-to-beat changes in heart rate. As a person inhales, his or her heart rate increases; upon exhalation, the heart rate decreases.

Anatomy of an HRV Graph 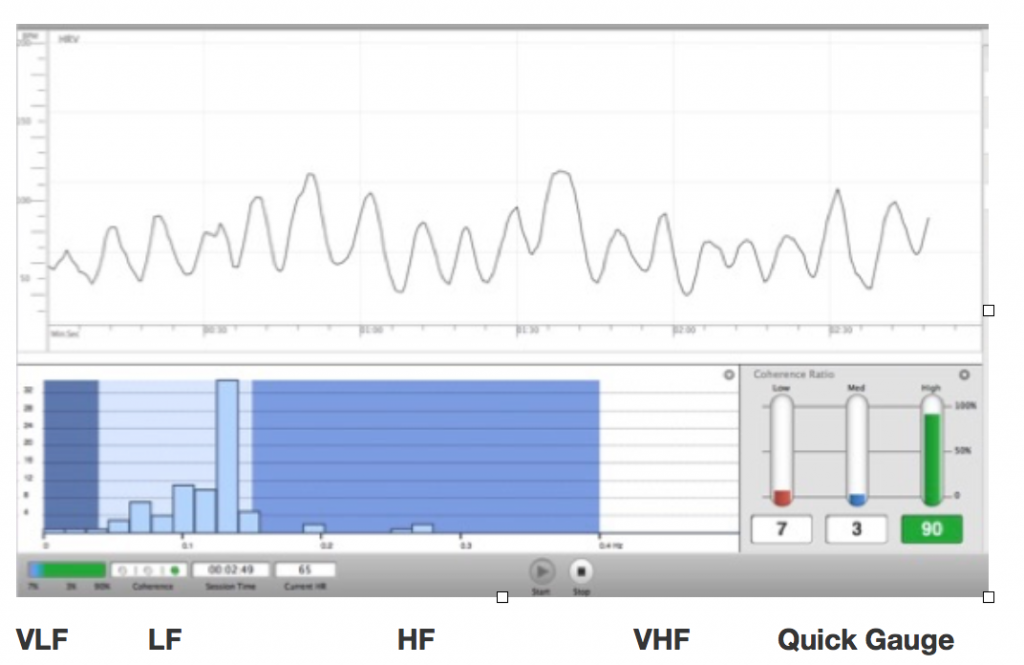 Sympathetic Activity = VLF (very low frequency 0.0033 to 0.04 Hz)
Zone of heart coherence = LF (low frequency 0.04 to 0.15 Hz)
Parasympathetic Activity = HF (high frequency 0.15 to 0.4 Hz)
Through the mathematical use of the Fast Fourier transform (FFT) algorithm, the waveform data from the upper graph is calculated into frequency spectrums shown in the bar graphs. The very low frequency (VLF) range (0.0033−0.04 Hz) is primarily an index of sympathetic activity, while power in the high frequency (HF) range (0.15−0.4 Hz), represents the more rapid beat-to-beat changes in heart rate due to parasympathetic activity. The frequency range of 0.1 Hz +/- 0.05 Hz  is called the low frequency (LF) range and reflects the zone of high heart coherence. The psychological-physiological (mind-body) factors that affect the spectral data are complex.

All you need to do is get into the green zone.

A good place for the practitioner to begin is to simply understand that with practice, breath + mindset (i.e. through 11-Minute Meds) will yield a high level of heart coherence. For clinicians and other interested persons a more detailed scientific explanation of heart rate variability please refer to: The Coherent Heart: Heart-Brain Interactions, Psychophysiological Coherence, and the Emergence of System-Wide Order published by HeartMath® Research Center.

A coherent heart changes heart rate smoothly, while an incoherent heart forms an erratic heart rhythm. When an individual self-regulates emotional states effectively (i.e. through breath and meditation), the heart generates a rhythmic  sine wave pattern that reflects a balanced ANS (refer to upper graph in the next image). In turn, this coherent pattern establishes a healthy nervous system and optimal hormonal levels.
For the meditator, you do not need to know anything technical. You simply want to move from the red zone of low coherence, to the blue zone of medium coherence, and ultimately, to the green zone of high coherence. HRV is an evidence-based tool that allows a window to access to your own autonomic nervous. Syncing HRV feedback with the 11-minute meditations allows you to shift from a chaotic heart rhythm to one that is smooth and  coherent.

A little history about HRV

Clinical use of HRV monitoring began in 1965 with fetal monitoring to assess fetal distress and risk of death. HRV frequency domain analysis derived from the ECG was first used in the 1970s to assess risk of death from heart disease. Today, HRV is used to determine ANS health and vagal tonality, a clear indicator of cardiac health and many other causes of morbidity. HRV feedback has far wider applications than just heart disease. Most disease states are caused by prolonged psycho–physical stress and will be accompanied by low HRV and low heart coherence. A couple key milestones in the use of HRV includes:
1960-70’S: Lacey, heart communicates with brain & effects human emotions
1974: Gahery & Vigier research the vagus nerve (X Cranial Nerve)
1991: Dr. J. Andrew Armour induces concept of “ Heart-Brain”
HRV is a valuable biomarker, and underutilized in many areas of medicine and more broadly in healthcare. Geneticist, Dr. Mae-Wan Ho suggested that “the idea of coherence is so foreign to most Western-trained scientists that there has been a lot of resistance to it from the mainstream” (Rainbow 116).

Perhaps an easy way to understand the concept of coherence is through the analogy of a school of fish, as described by Nobel prize-winning author John Steinbeck. He witnessed the phenomenon of coherence when studying schools of fish with biologist Ed Ricketts during their explorations in the Sea of Cortez in the 1940s.  Steinbeck’s description captures the mystery of the inexplicable phenomenon of coherence.

“The schools swam, marshaled and patrolled. They turned as a unit and dived as a unit. In their millions they followed a pattern minute as to direction and depth and speed.

If we can think in this way, in the same direction, that the water interval between fish and fish is identical with all the units, and that it seems to be directed by a school intelligence. . . . And perhaps this unit of survival may key into the larger animal which is the life of all the sea, and this into the larger of the world” (Log of the Sea of Cortez, 243-244).

Heart coherence behaves similarly where the “school of fish” incorporates the body’s major organs then down to the cellular level. When the heart is in a coherent state, the rest of the body’s oscillating systems come under its influence and the body acts in synchronized unity. Brain waves, respiration, blood pressure all come under command of the heart and behave as “one unit.”The ANS is essentially the somatic spectrum of unconscious physicality. In other words, its processes typically function below conscious awareness.

One does not have to remember to breathe day or night or raise and lower blood pressure in response to the body’s requirements for more or less blood flow. Internal organs and somatic systems are regulated by the ANS when the internal or external environment calls for it. However, the conscious mind can be trained to effectively alter the dynamic balance between sympathetic and parasympathetic activity, and consciously bring the heart into a state of coherence in the face of external stressors.

This begins your journey to Self-mastery. This journey begins with HeartMath®.